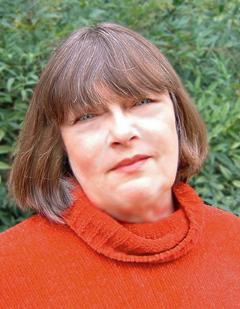 Trana Mae Simmons lives in East Texas with her family and pets in a haunted house. When not writing romance, she loves to travel, exploring off-the-beaten paths. And when a ghost happens by, it delights her immensely.
Learn more about Trana at www.tranamaesimmons.com

When Sarah Channing's fiancé hardens his heart toward a needy child named Mairi, the New York Socialite puts her wedding on hold to locate the child's only relatives, hidden deep in the Appalachians.

Arriving at Sawback Mountain, Sarah meets Wyn, Mairi's handsome older cousin, and finds herself wishing for something she doesn't have: a glimmer of beauty.

Wyn had his fill of beautiful city-bred women during his time in Washington, DC, as a senator's aide. Yet he's impressed by Sarah, working hard to gain the love and respect of the mountain folks.

But Sarah is making mistake after mistake as she tries to use her money and influence to improve the lives of the children.

Perhaps the proud mountain folk are right: a cultured socialite, even one without beauty, has no place on their mountain or in the heart of a mountain man who's vowed to never again leave the life he loves.

Stuck playing sheriff in Liberty Flats, Jake Cameron impatiently waits for headquarters to assign a permanent lawman so he can return to his life as a Texas Ranger.

Then Sunny Fannin sashays into town, intent on claiming her late-mother's estate and bullying the townsfolk into some semblance of social culture.

At least now, Jake has something interesting to watch.

But, Sunny has no use for a lazy Texas Ranger who spends his days watching the folk from beneath his tipped-down hat. She's on the hunt for her scoundrel of a father, who left her mother to raise her alone.

Then the town's orphaned ragamuffin, who's been Sunny's yammering shadow since her arrival, begins talking-up Jake's 'better' side including the Ranger's ability to protect Sunny from danger.

Can the wisdom of a child overcome the obstacles keeping two opposites from attracting? Only if Jake is willing to help Sunny by betraying a perilous secret.

REVIEWS:
"...a fun-to-read western romance filled with elements from the mystery genre that make it a very interesting reading experience." ~Harriet Klausner

Laura Goodman wants one last opportunity to race her new breed of huskies before settling down as a wife. Her sights set on the Iditarod, Laura knows she needs the help of Sandy Montdulac, the best sled dog trainer alive.

Sandy knows the grueling Iditarod is no place for a woman and an untested breed of dogs. But he needs Laura Goodman's money. Forced to flee Alaska to stop his rich in-laws from taking his child, Sandy vows to keep it 'all business' with Miss Goodman.

Laura is well-prepared for the riggers of training and the backlash from fellow mushers. She didn't plan on falling for the tight-lipped Sandy and his little girl.

But for as much as Laura's laughter and beauty breathes life into Sandy's world, Laura wasn't raised to live life on the run. He will take his little girl and leave when the race starts.

Until Laura proves him wrong. 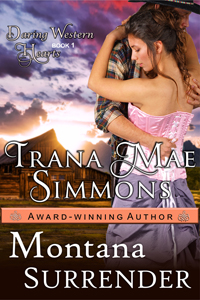 Wrongly accused of a vicious crime, Storm intends to clear his name—and bring the real villain to justice.

But when the lovely Jessica—who's looking for a stash of cursed gold to pay a looming mortgage—stumbles into Storm's tangled web of deception, she up-ends his well-laid plans. And while the fiery passion between them is undeniable, falling in love is far too dangerous. 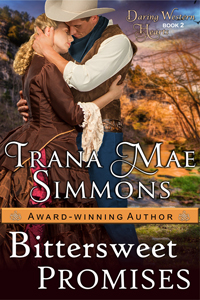 Cody Garret likes everything in its place: his horse in the corral, his six-gun in his holster, and his money in the bank. There's no way on earth he can tolerate a woman like Shanna Van Alstyne. With a spirit as fiery as the blazing sun, she has a temper to match.

Unfortunately, southern manners dictate he save her life, but then she's on her own—until a daring robbery throws the infuriating woman back into his arms, again. 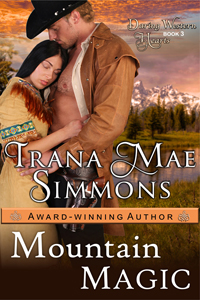 Jonathan Clay won the ragamuffin, Smelly Woman, in a game of chance. When he got past her smell, he discovered a feisty woman who aroused desire like he'd never known. But taking her to his family in Richmond will surely raise its own stink.

Caitlyn O'Shaunessy, aka Smelly Woman, would rather face down a mama grizzly than confront her feelings for the blue-eyed southerner who rescued her.

But she can't seem to walk away.

REVIEWS:
"Ms. Simmons throws in just the right touch of excitement, mystery and danger to keep you on the edge of your seat until the last "I love you"." ~Genie Romex Review.