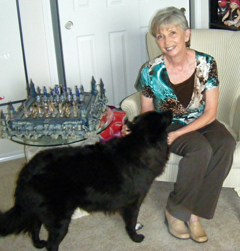 USA Today Bestselling author, Marilyn Campbell is a true thrill-junkie who believes a great roller coaster ride can cure whatever ails her. Marilyn resides in Massachusetts, with her four-legged companions, Milkdud and Sweetie.

Romulus intends to be Governor of Innerworld but the moment he touches Aster, the fever takes hold, bonding them as soul-mates. Never has the fever affected a Terran, and intimacy between the races is forbidden; a conundrum Romulus has no time to explore.

The asteroid heading toward Earth is about to destroy both their worlds. Risking everything, Romulus takes Aster with him to Outerworld to warn Earth's scientists and is captured.

Now Aster must face her destiny and convince the powers of Norona to accept a long-hidden secret if her soul-mate is to survive.
REVIEWS:
"First of a landmark series... provocative concepts... will fascinate and charm romance fans." ~Romantic Times

Falcon, a gifted half-breed tracker, is in San Francisco to retrieve a ring stolen from Innerworld, located in Earth's core. Too many Terrans are dying at the hands of the billionaire thief experimenting with the ring to gain access to Innerworld.

What should have been a simple assignment is quickly complicated by repeated encounters with Stephanie Barbanell, a Terran investigator hired by the wife of a scientist kidnapped by the billionaire.

Stephanie has always worked alone, and Falcon is not worthy of trust. But joining forces with the mysterious man seems the only solution to rescuing her client's husband... until the forced proximity ignites overpowering and unwelcome desires.

Stephanie's experience has taught her that sex equals loss of independence. A sexual virgin, Falcon believes submission to his human half will strip him of his superior abilities.

But success of the mission will require both... regardless of the loss.
REVIEWS:
"Falcon is [the] embodiment of every woman's secret fantasy." ~Romantic Times

Cherry Cochran, a feisty Terran actress in Innerworld, witnesses the murder of an intergalactic trader. When Gallant Voyager, an agent for the Consociation, sees the victim speak his final words to Cherry, he kidnaps her "for her own protection".

Gallant needs his prisoner's cooperation to discover why the trader was permanently silenced. But he has no idea how much trouble he's brought aboard his ship. While tracking the killer to a distant galaxy, his verbal battles with Cherry turn physical as primitive passions burn away their differences.

Then Cherry discovers Gallant's truth: he is slave to the barbaric alien behind the murder, and there's a double-cross in the works.

With her own life in danger, Cherry faces a choice: put on the performance of her life to escape the captor she's come to love and warn the Consociation of impending invasion, or rely on a suspicious offer of help from one of the barbarians to save her lover.

When a dying time-traveler arrives in Innerworld to warn Shara Locke of a coming disaster, she is convinced that if she goes back far enough in time, she can prevent the catastrophe and clear up a personal dilemma in her ancestry.

Then Gabriel Drumayne, a Noronian historian, discovers Shara's plans and threatens to expose her unless she takes him along. Gabriel's agenda: stop Shara.

But the device is faulty, each time-hop rapidly disintegrating Innerworld and its people, while igniting the Noronian mating fever in Gabriel and Shara, bonding them as soul-mates.

When the pair finally return, nothing is as it was. The only solution: erase all memory of their journey including information gathered to prevent the coming disaster... and their love.

Innerworld Emissary Tarla Yan's covert assignment as an Army nurse is finally over. On a flight back to America, surrounded by human medical personnel, wounded soldiers and convicted criminals--the worst of which is Logan McKay--a freak lightning storm transports the cadre of warriors to Heart, an alternate dimension where the sky is green, the grass is blue and women rule.

The female rulers of Heart immediately incarcerate the arriving barbarians and Tarla finds herself in a small cell with Logan; she the assigned mistress, and he the servant.

As Logan chafes against his new role and fights to hide his criminal past, Tarla holds fast to her human cover, while both struggle with rising desires. Then Heart's rulers arrive with an offer for Tarla: lead her experienced warriors in a war to defeat the invading alien force in exchange for freedom.

Now Tarla and Logan must figure out how to work together for everyone's survival. But the heat of battle soon requires Logan to use skills that reveal his dark criminal past and Tarla faces exposure as alien as the approaching enemy.

REVIEWS:
"A sizzling battle of the sexes." ~Romantic Times

But Roman's presence triggers a cat-like heat in Erin, which affects his invisibility control, forcing Roman to reveal himself in full Noronian mating fever.

Neither Roman nor Erin desire the lifelong commitment the fever requires, but if they don't take drastic action, neither will survive the coming storm.

The Lust and Lies Series 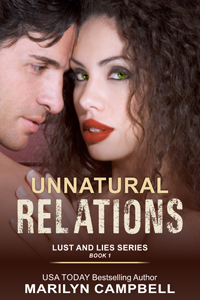 After nine years on the run, Barbara Johnson believes she's finally safe from abuse and the wealthy family wanting to take her child.

But when her location is accidently revealed, those wanting to see her suffer are coming with every legal trick and weapon of terror.

Determined to stand her ground, Barbara is swept off her feet when the handsome, Kyle Trent, saves her from a mugger. The timing couldn't be worse for falling in love, but Kyle is simply too perfect to push away, and she desperately needs someone who makes her feel desirable.

As the burning passion of the present converges with the nightmares of Barbara's past, she's once again reminded . . . no one can be trusted. 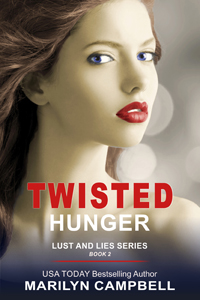 As Ellery Winters watches her mother's casket lower into the ground, a stranger suggests her mother was murdered and vice-presidential hopeful, Abraham Lincoln Jones, might be involved. Desperate to uncover the truth, Ellery goes undercover as Jones' assistant.

Twenty-one years ago, Luke Madigan, as a high-school senior, witnessed a prostitute gruesomely murder her client. The event has haunted Luke's nightmares ever since.

For years, the psychotic hooker, known as "The Eye Doctor", left a trail of victims, but never enough clues to find her. When The Eye Doctor strikes close to home, Luke decides to put an end to the madness, even if he walks right into the Doctor's waiting room.

Ellery and Luke don't realize it, but they have something in common--beyond sex ignited by burning passion fueled by lies. But neither will be denied, despite the deadly danger closing in on them. 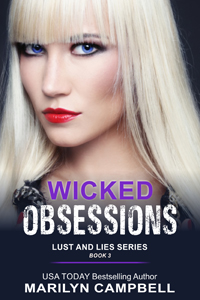 "A spine-tingling, chilling ride into the mind of a demented killer." ~Rave Reviews

Teri Carmichael is hailed as one of New York's most-promising new artists. But her marriage to a compulsive gambler is wrecking her life. When her scumbag husband refuses to give her a divorce, she thinks her life can't get any worse, until the police find his brutally murdered corpse in an empty apartment.

Further complicating Teri's world is her new photographer, Drew Marshall. He's starting over from a disastrous downward spiral of his own, and nothing gives Drew hope as much as being with Teri.

Teri and Drew's powerful chemistry could drive them to the happy ending they've always wanted--if it wasn't for the web of evil being spun around them. A hardened detective is convinced Teri killed her husband, and Selena, a young woman who loves Teri like a mother, is willing to kill to protect Teri from harm . . . in fact, she already has. 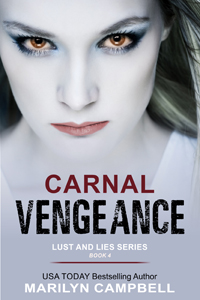 Holly Kaufman's heart is closed to love. She never shared what those frat brothers had done to her two decades ago, but when she’s asked to join a support group, she hesitates only briefly.

Now mature women, the former coeds have only one item on their agenda--revenge. Holly is chosen to feed information to a reporter without implicating the group. David Wells is the best man for the job.

David smells a prize-winning story, and Holly Kaufman looks like his best bet for unearthing the truth. Although seduction is his preferred tool for getting information from a woman, he's unprepared for being the one seduced.

But, when the former frat boys start turning up dead, Holly wants out. Unfortunately, she's now a prime suspect and her only hope of proving innocence lies with the man who's awakening her passion but cannot be trusted.

Convicted murderer transports from electric chair in 1965 to suspense author's hideaway in 2016, in Marilyn Campbell's "provocative and stimulating" [Rendezvous] time-travel romance OUT OF TIME.

In 1965 Atlanta, Jack Templeton is strapped in the electric chair, about to be executed for murder when he spontaneously combusts.

In 2016, Kelly Kirkwood is researching the supernatural twist surrounding Jack's case when he abruptly appears before her, in the flesh.

Shocked and unsure how long Jack will remain, the pair race against time to clear Jack's name as lust and then love takes hold. But the true villains are stalking their every move, willing to do anything to keep the past a secret.

A young 1950s war-widow time travels to 2016 to save a stranger's life at the risk of her own in Marilyn Campbell's "skillfully blended" [The Time Machine] time-travel romance, JUST IN TIME.

When Beverly Newcastle, a young 1950s war-widow, encounters a gypsy fortune teller with a magic potion, she's tossed 5 decades into the future and lands in the arms of Josh Colby, a half-Mohawk, Harley-riding bouncer.

Desperate to clear his imprisoned grandfather of a murder he did not commit, Josh learns that Beverly holds the key.

To turn that key, Beverly must travel back to her own time. But by the time he and Beverly figure out how to send her back, Beverly also holds the key to his heart.

Put some sparkle in your Holidays with USA Today Bestselling author Marilyn Campbell's Christmas Presents, and discover a Saint, a Sinner, and a Town full of Spirits.

Angels & Shamrocks: During the Christmas season, angels have a few more heavenly abilities than usual. So when a mischievous Irish angel finally convinces his overworked grandson to notice an accident-prone, single mom, he's sure they will be decorating one tree instead of two this year.

The Perfect Gift: The instant Zachariah shuffles into Leanne's office, she's sure he's the handy, retired gentleman who, in exchange for room and board, will help her fix up the Key West home she just inherited. But Zach is neither handy nor retired. He's a disguised fugitive in desperate need of the perfect Christmas gift.

Ghosts of Christmas Past: Lured to the charming little town of Haversham, Vermont by Wesley Haversham XII, journalist Felicity Flowers intends to debunk the haunting of the colonial Haversham Inn, while the townspeople, along with their ghostly ancestors, ensure everyone gets what they truly want for Christmas.