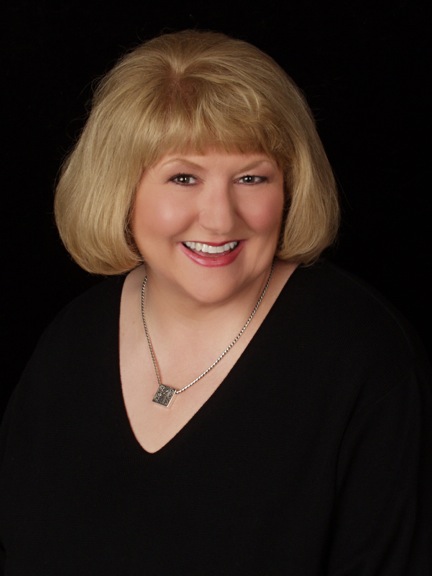 Award-winning author, Elizabeth Grayson was a bookish child who loved stories of adventure and romance. She began writing in grade school and has never stopped. After teaching in elementary schools and at the St. Louis Art Museum, she began writing full time and has garnered many writing awards. Elizabeth lives in the mid-west with her husband and cat. 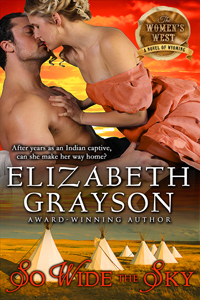 So Wide the Sky

Having survived nine years as a Kiowa captive, Cassandra Morgan is traded back to the whites. Tattooed and emotionally scarred, Cassandra faces a life she hardly remembers.

Two men attempt to understand her pain: the half-Indian scout Lone Hunter Jalbert, and her childhood sweetheart cavalry Captain Drew Reynolds who was left for dead in the attack that killed both their families and who has sworn retribution.

Torn between two worlds and two men, Cassie must learn anew the true meaning of love, courage and forgiveness. 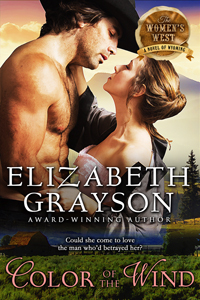 Color of the Wind

When Ardith Merritt promised her dying step-sister she'd take her niece and nephews to their father in Wyoming, she knew it meant confronting Baird Northcross, the man who, on the eve of their wedding, jilted her and eloped with her sister.

Exiled to a ranch in Wyoming by his aristocratic British family, Baird Northcross is a failure, a scoundrel, and a cad. But the rugged beauty of the land, the unexpected satisfaction of hard work, and the presence of a woman like no other awakens the possibility of happiness... if only he can keep from destroying this last, precious chance to win Ardith's love. 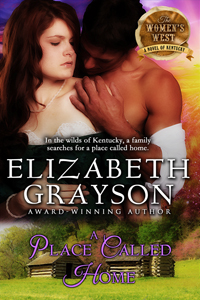 When Indians kill her husband on the trail to Kentucky, Livi Talbot and her two young children bury him then continue their trek on the Wilderness Road to what David promised would be their new home.

While Livi settles into the wilderness cabin David built with his own hands, Reid Campbell, David's best friend and Livi's nemesis, arrives. A wanderer who spends more time with Indians than whites, Reid produces a document stating all holdings revert to him, in the case of David's death.

Reid insists Livi and the children return to Virginia, but Livi refuses. She's too far along in her pregnancy with David's last child, to travel. Summer ensues, filled with hard work, danger from Indian raids and a constant battle of wills between Livi and Reid.

As winter deepens, Reid helps Livi deliver David's son. Reid knows he should gift the cabin and land to Livi and walk away, but his heart has finally found a family and a place called home.

REVIEWS:
"...keeps you reading to the exclusion of all else." ~Rendezvous

Painted by the Sun

Following the westward route of the Orphan Trains, itinerant photographer Shea Waterston is searching for the infant son she was forced to give up ten years ago. To pay her way, Shea photographs everything from church choirs to outlaws, and is setting up her camera at a hanging when she lands in Judge Gallimore's jail.

Colorado Territorial Judge Cameron Gallimore, a strong but just man, damned himself years before with one fateful decision. But when Shea is hurt saving his life, Cameron takes her to his ranch—against his own better judgement—to recuperate. While there, Shea begins to suspect the Judge's ten-year-old son is her own lost child.

But the boy's identity isn't the only secret Cam has, and just as Shea begins to heal the empty places in his heart, Cam's past catches up with him. Now Cameron must stand against his enemies to protect his boy and win Shea's love forever.

Moon on the Water