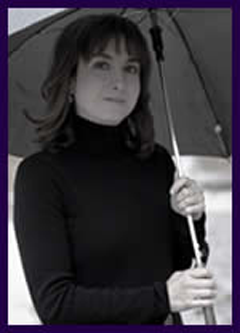 Award-winning author Amanda McCabe wrote her first romance at the age of sixteen, and never stopped. Now she lives in New Mexico with two cats, a Pug, a very bossy miniature Poodle, and far too many books.

Following the death of her parents, Miss Cassandra "Cassie" Richards returns to England, and accepts Lady Royce's invitation to Cornwall.

A man of logic and order, Phillip has no patience for Miss Cassandra's frivolous notions of ghosts and hauntings.

Fortunately, there're a couple of loving spirits willing to give the couple a helping hand.

REVIEWS:
"An intriguing and clever mix of the living and the dead, this lively tale is sure to please." ~Romantic Times

A Lady in Disguise

Eluding her chaperone, Lady Emma Watson dons a simple maid's outfit and sets out to discover London during celebrations of the Waterloo victory. Just when Emma thinks it's time to return home, she encounters a dangerously sexy tradesman.

A veteran of the Peninsula campaign, Jack Howard, Viscount St. Albans, may be simply dressed, however he is by no means a tradesman. But when he meets the lovely Lady Emma clad as a housemaid, he all too willingly plays along. Seduced by her snow-white skin and dazzling features, Jack quickly discovers he'll do anything to make sure this game of disguises never ends.

Kierin McKendry is indentured to J. Talbot, a ruthless saloon owner, until Clay Holt wins her in a rigged poker game. When Clay tries to collect his winnings, he's attacked by Talbot's men and badly injured.

Clay never expected Keirin to take him to the wagon train on which he was due to leave, or that she would lie about being his wife and nurse him back to health while on the trail.

But, Keirin isn't interested in a man consumed by avenging his wife's murder. She's pursuing her father, who sold her for a ticket to the California gold fields.

However, posing as a married couple, spending night after night together, is fanning Keirin and Clay into a different kind of blinding passion that's blazing the way for Talbot, who will kill to have what's his.

The daughter of an infamous courtesan, Katerina loses everyone she loves in a shipwreck off the coast of Italy. Now, without a penny to her name, she decides to pass herself off as a governess.

Still mourning his late wife, Michael Lindley knows his little sister and daughter need a woman's nurturing. But the dark-eyed beauty standing on his doorstep, claiming to be a widowed governess, is rekindling feelings he thought snuffed out long ago. Albeit, he hires her anyway.

But when Katerina and Michael finally dare to give way to desire, Katerina's past steps from the shadows... and demands her life.
REVIEWS:
"A satisfying read... with Gothic overtones and luscious prose." ~Romance Reader